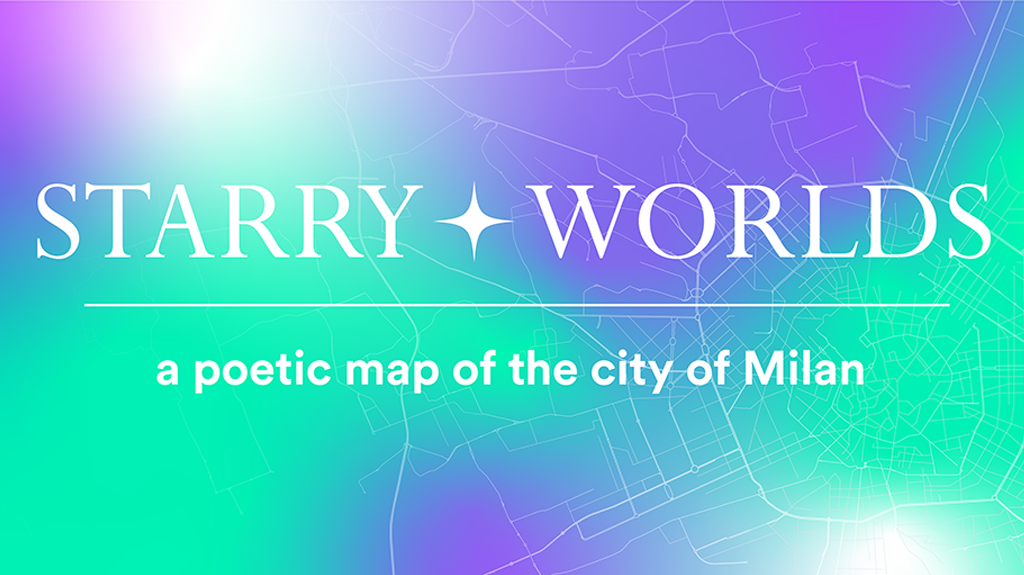 The stars had only one task,

they taught me how to read.

They taught me I had a language in heaven

and another language on earth.

“Poetic regualtions”, translated from the Arabic by Jeffrey Sacks,

Milan, 16 September 2021 - Starry Worlds is a brand new project created by miart for the Milan Art Week and focuses in paying special attention to the poetic word interpreted as a universal language, to promote the blossoming of new methods of communication among the people that participate in the fair and the Milan Art Week.

This project started to take shape right from its selected title, specifically chosen for the twenty-fifth edition of miart, Dismantling the silence - from the poetry collection by the same name created by the American poet of Serbian origins Charles Simić, fifty years after publication. Other quotes then followed to accompany the progressive unveiling and communication of the contents of the fair: from Blossoming of trust, an expression taken from a poem by Moira Egan, to Dwell in possibility, a verse borrowed from Emily Dickinson.

The interest in poetic fragments expanded further through a series of initiatives aim at giving value to new exchanges between past and present, history and experimentation, including And flowers / words - a title once again taken from the writings of Charles Simić - a series of conversations on poetry that were held weekly on miart's digital channels and that saw the participation of several celebrities from the Italian art and culture world: from Chiara Costa to Luca Lo Pinto, Lorenzo Giusti, Moira Egan, Sergio Ricciardone, Emanuele Trevi, Cristiana Perrella, Massimiliano Gioni, Mariangela Gualtieri all the way to Luca Cerizza.

The latest of these initiatives is Starry Worlds, a new proposal inspired by the poem For Memory (1981) by the American poet and intellectual Adrienne Rich (1929-2012) - and in particular by the verses:

remembering. Putting together, inch by inch

the starry worlds. From all the lost collections.

Driven by the wish to “put together, inch by inch, the starry worlds”, miart invited many Milan-based participants by asking the artists involved in the September exhibitions to share verses, quotes and fragments of poems that are significant or influential for their work. Starting from Monday 13 September, this anthology-constellation will be presented through miart digital for what will be to all effects a poetic map of the city of Milan.

Maurizio Cattelan, protagonist of Breath Ghost Blind at Pirelli HangarBicocca who wished ti share poems by the Kurdish-Syrian poet Golan Haji (1977) and that embodies the spirit of his exhibition. The artist has also chosen an excerpt from Haji for the exhibition catalogue: a passage in prose where she offers a new interpretation of the figure of the beggar and that of the dog - key to her new project - juxtaposing two fundamental figures in ancient literature: the Arab poet and scholar Al-Maarri and the Greek poet Homer.

Simon Fujiwara, participating in Fondazione Prada with the exhibition Who the Bær, has also offered a comparison yet less traditional in this case. In fact, according to the artist, the two main sources of linguistic inspiration for his work are William Shakespeare and Winnie the Pooh, both of whom he strongly claims to be authors of poetry.

Alessandro Pessoli, brought forth the Testa Cristiana project to the Chiostri di Sant'Eustorgio and offered the last verses of The Wast Land by T.S. Eliot, where the poet's technique is well exemplified. In Pessoli's words, Eliot "has a way of composing that is very similar to mine: building on splinters and ruins, the juxtaposition of distant but significant times and origins. I believe this is the truth of art, its continuous reconnection of human experience across time and cultures."

Nairy Baghramian - who for the third edition of the Furla Series by Fondazione Furla brings her Misfits to GAM - Galleria d'Arte Moderna; then Zehra Dogan, at PAC - Padiglione d'Arte Contemporanea, with The Time of the Butterflies; and yet again Adrian Paci, whose project Rudere inaugurates the new season of Artline in the Citylife park - have each offered a poem that means a lot to each of them: respectively, Autobiographia Literaria by  American Frank O'Hara; Letters of a man locked in solitary confinement Ankara by Turkish writer Nazim Hikmet; and The Child, by the Albanian poet Ledia Dushi.

Elisabetta Benassi, at the Fondazione Adolfo Pini with "Lady and Gentlemen", instead wanted to offer a key figure in the art world as an example, highlighting even more the link between visual language and poetic language, choosing the emblematic title of a work by Mario Merz.

Simone Fattal for Fondazione ICA chose to draw his inspiration from a mythological character, Lino, a lyre player and music master to Hercules and Orpheus, citing a fragment of thirteen verses taken from Giovanni Stobeo's On The Nature of the World.

The exhibition Allusioni Iperformali by Carlo Mollino at the Triennale Milano was contextualised by the artist, architect and writer Corrado Levi , who offered a very poetic phrase detailed by Mollino himself at the Faculty in Turin. "This phrase has been a life statement," Levi said about it, "it has accompanied me in my long militancy in gay self-consciousness groups, where I learned to be receptive and never to impose myself as an authority. It has been a beacon in the way I teach architecture, letting all students express themselves."

Vincenzo Agnetti, Milan-based poet-artist par excellence could not be missing from this anthology and participates with a new iteration of his La macchina drogata at the Archivio Vincenzo Agnetti. With the cooperation of his daughter Germana Agnetti, the opening lines of one of his best collections, Machiavelli 30were chosen as a tribute..

Finally, the synergy and time coincidence between miart and MiTo Settembre Musica led to the decision to also include a concert - La luce, il mattino at the Teatro Dal Verme on 19 September - where Estonian composer Tõnu Kõrvits will perform a powerful cycle for choir and strings on texts by Cesare Pavese. To pay homage to Pavese, Pavese's poem In the morning you always come back was chosen as the title of the concert.

Of a dead tree…

The eye is a slave of what it sees.

Your fear blinded you,

my blindness set me free.

When I was a child
I played by myself in a
corner of the schoolyard
all alone.

I hated dolls and I
hated games, animals were
not friendly and birds
flew away.

If anyone was looking
for me I hid behind a
tree and cried out "I am
an orphan."

And here I am, the
center of all beauty!
writing these poems!
Imagine!

Today, for the first time.

they took me out into the sun

and for the first time in my life

I looked at the sky

amazed that it was so far

I stood without moving

and then respectfully sat on the black earth,

pressed my back against the wall.

Now, not even a thought of dying,

not a thought of freedom, of my wife

Be not afeard; the isle is full of noises,
Sounds and sweet airs, that give delight, and hurt not.
Sometimes a thousand twangling instruments
Will hum about mine ears; and sometime voices,
That, if I then had waked after long sleep,
Will make me sleep again: and then, in dreaming,
The clouds methought would open, and show riches
Ready to drop upon me; that, when I waked,
I cried to dream again.

Fragment of thirteen lines from Linus, cited by Stobaeus (5th century AD) in “The Orphic Poems” by L.M.West, 1983

So through discord all things are steered through all.

From the whole are all things, all things form a whole,

all things are one, each part of all ,all in one;
For from a single whole all these things came,

and from them in due time will one return,

that's ever one and many...

Often the same will be again, no end
will limit them, ever limited...
For so undying death invests all things,
all dies that's mortal, but the substrate was

and is immortal ever, fashioned thus,

yet with strange images and varied form
will change and vanish from the sight of all.

I sat upon the shore
Fishing, with the arid plain behind me
Shall I at least set my lands in order?
London Bridge is falling down falling down falling down
Poi s’ascose nel foco che gli affina
Quando fiam uti chelidon — O swallow swallow
Le Prince d’Aquitaine à la tour abolie
These fragments I have shored against my ruins
Why then Ile fit you. Hieronymo’s mad againe.

Corrado, ricordati che io sono un vettore non una forza. [Corrado, remember that I am a carrier not a force]

142 galleries, a third of which operate internationally, have confirmed their participation in the twenty-fifth edition of miart, Milan’s modern and contemporary art fair organised ...